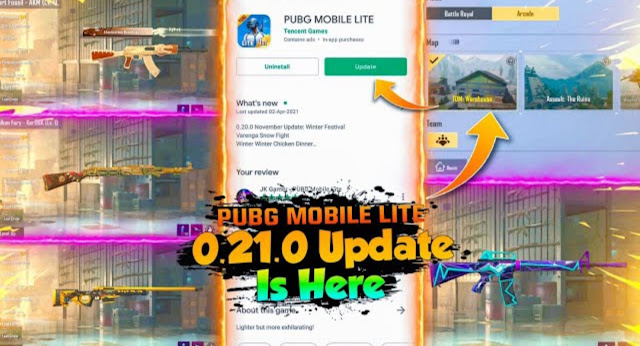 PUBG Mobile Lite 0.21.0 global update released by the developers. The players can download the new update directly from Google Play Store/Apple App Store or they can download it by using APK and OBB files.

The PUBG Lite new update size is around 613MB and it may varies on user devices. The players have to maintain sufficient free storage space on their devices for downloading the update.

The developers added new content on every update. So, since the game release it has have huge fan base. In this article we will check all the new features which are added in the PUBG Mobile new Update 0.21.0 global version.

The most popular mode TDM Warehouse removed by the developers in PUBG Mobile Lite. Now with the new update they bring back the TDM mode. So everyone happy with this map come back.

The developers added some new gun skins in the Workshop section.

The PUBG Lite developers not included many features on this update. They just bring the above features in the game.

The players have more expectations on the new update features. But, the developers completely disappointed the PUBG Lite players by releasing new update without any new features.