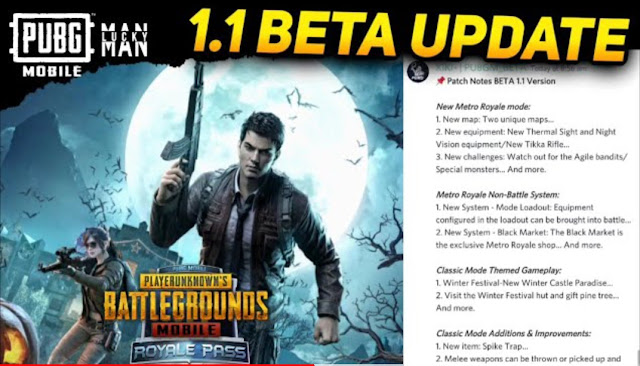 PUBG Mobile 1.1 Beta Update Patch notes are revealed officially by the game developers. In this update new game modes with unique maps and some new features are added. We will discuss all the patch notes of this upcoming update on this article. Let check it.

They are also bringing some new weapons and instruments in this game mode. In that Tikka Rifle is the special one in those, it may be come with 15x scope. Already 15x scope teaser was released. Along with this a new thermal sight and night vision equipment’s are added to this new game mode.

Coming to the challenges in Metro Royale mode there may be chance to take monsters in this mode. This will be similar to the zombie mode and more challenges will be takes place on this. A black market also taking in this new update this is the exclusive Metro Royale Shop to buy guns and more.

In classic mode gameplay they are coming with a new theme called “Winter Festival”. This was takes place based on the upcoming winter season. In this you can check the new winter castle paradise, winter festival hut, gift pine tree and more new things in the game.

Apart from these they are also added some additional improvements in classic game play. A new item Spike Trap will be available and Melee weapons can be thrown or picked up and put into players backpacks and more.

PUBG Mobile 1.1 Beta Update will be available soon to the players. I think most of the players are more excited to the release date of this 1.1 Beta update.