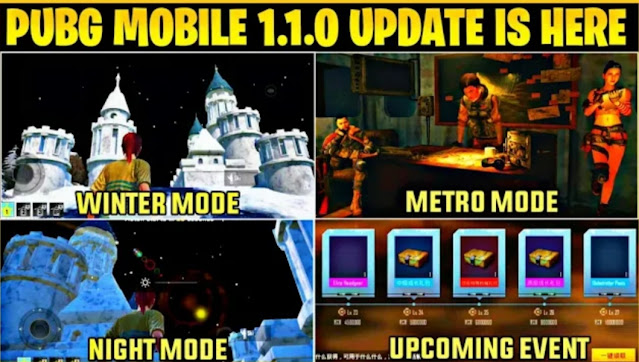 PUBG Mobile released 1.1 Beta update on 17th October. This is a testing version before releasing a global version. The game developers receives feedback from the players about bugs and glitches those will be fixed in global version.

The game developers brings new game modes and winter festival theme related updates on this beta version. So, this beta update will be a amazing one. Many players wants to play this new update.

PUBG corporation collaborated with Metro Exodus games on August. So with this coloration a new game play Metro Royale mode is introducing in PUBG Mobile. It is a different game mode with three unique maps.

Initially player can access first map only, other two maps will unlock one by one once the players reaches to higher ranks. Some big monster and flying dragons are also added in Metro Royale mode.

Apart from this PUBG Mobile 1.1 beta has updates related to Winter Festival theme. A new game mode Arctic in Erangel 2.0 map, Ice glaciers in between water, Winter huts with gifts pine trees and Winter Castle Paradise all these things added in this update.

Step 1: Download the file from the above provided link.

Step 2: Enable ‘Install from Unknown Source’ on your settings if it disabled.

Step 3: Open downloaded file on your file browser and Install it.

Step 4: Run the application and enjoy playing the game.

The size of this update is around 1.36 GB so sufficient free storage space should be maintain.