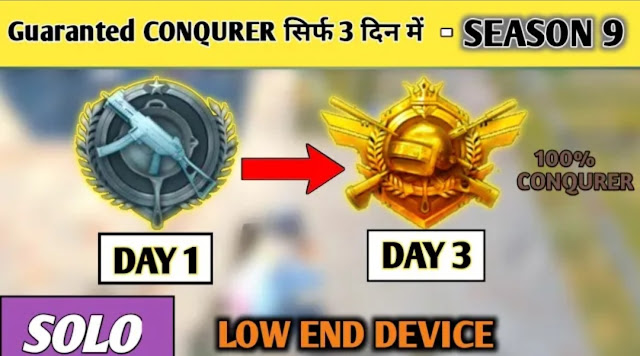 PUBG Mobile Lite new Season 9 tier has been released with some delay. As usually, the season is running for a period of 3 months i.e., from January 2021 to March 2021.

The players who want to push their rank to Conqueror easily in new season this is the right place. This article provides some tips and tricks that will helpful for players to push their tier ranks easily.

The Season rewards are completely based on the tier system. There are 7 major tiers such as Bronze, Silver, Gold, Platinum, Diamond, Crown, Ace. Except Ace every tier again has 5 minor tiers.

There are several key factors such as Survive time, Kills, Damage and Health restored affects the ranking system. In that Survive time and kills are the major things so, the players have to survive more time in the game and smashed more kills without eliminate.

Landing position is the important thing to survive for more time in the game. If you are landed in the plane moving direction, it’s difficult to survive more time. So, prefer to land away from the plane direction, that will also helpful to collect required loot and get a chance to attack on enemies.

Killing enemies is one of the important factor after survive time for rank pushing. Consider below points to bagged more kills in the game.

These two are very easy things to do. Damage will happens while attacking on enemies similar for doing more damage fire vehicles. Restoring more health will also helps to increase season rank.