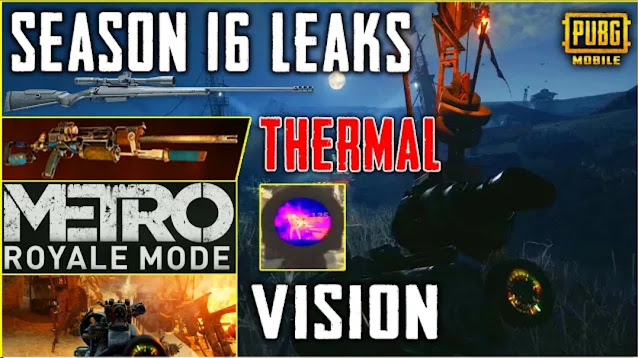 PUBG Mobile season 16 is likely to release on 16th November. The upcoming PUBG Season 16 leaks are revealed. Currently, PUBG Mobile Season 15 is going it will be concluded on 15th November so after end of this season, season 16 will be started on PUBG Mobile.

Before releasing a new update patch notes will be released in that they will give complete information about the coming update. The patch notes of PUBG 1.1 Update Season 16 are available now.

In season 16 update a new Metro Royale Mode is introducing into the game. This new mode is coming on the collaboration of PUBG with Metro Exodus Game. After these two collaboration Zombie mode Survive Till Dawn was released on Varenga map.

But the event related to Metro Exodus Game is need to be released so the collaboration event is releasing on the coming season 16 update by the PUBG game developers. Metro Royale Mode is coming with two new unique maps which are completely different to the remaining maps.

If you check the equipment’s in this new mode a Night Vision Goggles is available as similar to on every mode. But they are adding a new Thermal Sight which will be like a scope. It will indicates the enemies beside the wall also by the thermal vision. Along these a new Tikka Rifle will be coming with 15x scope.

If you check the challenges in Metro Royale mode as like as Zombie’s with a big boss here also some big monsters will come with a boss. But there is no comparison with zombies because it will come with two unique maps. So, a lot of new features will be available in this game mode. I think this will be a big game mode.

With new mode a non battle system also added, in this a mode loadout is available there you can configured the weapons which was needed in the game. With this a Black market also available this is like a item store you can buy items by using the coins which you are earned by playing game.

In Classic mode a new theme will be coming the season 16 is coming on the month of November that was winter season so the theme is coming related to Winter Festival. But there is no any information about the winter theme is available on which map.

But in this winter theme a Winter Castle Paradise will be available to the players and also a winter festival hut and a gift pine tree are available. I think the gift pine tree will be coming on December month as a Christmas event.

If you check the additional improvements in classic mode is they added a new item spike trap and thrown able Melee weapons. The item name spike trap itself saying it was an item used to trap the enemies.