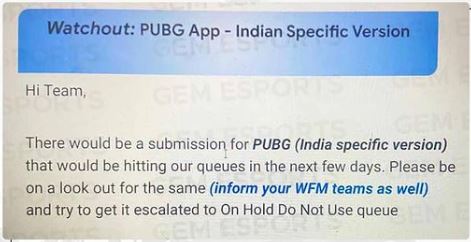 A news PUBG Mobile app to be published instantly on play store came from the inside source. It was shared by the GEM eSports on their Instagram account. Based on the recent activities the game will be released in very soon.

On 11th November the PUBG Corporation officially announced a new version is coming for Indian users, with that the game comeback in India was confirmed. Few days back, they also registered a company named PUBG INDIA PRIVATE LIMITED in Bangalore, Karnataka.

Now some leaks came from the Google Play Store review team, it means the PUBG Corporation speed up their process to launch the game in India.

PUBG Mobile APP to be Published Instantly on Play Store

“The Google Play store review team have been briefed stating to have the app published live instantly and not to be held for review.”

According to the inside sources “a notification has been sent to the review team of Google Play store yesterday, stating to publish the PUBG Mobile India version app live as soon as the developer uploads it.” But there is no official information about the release date.