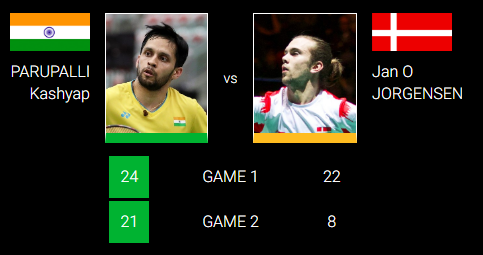 The Indian badminton player PARUPALLI Kashyap 24-22, 21-8 against the Denmark player Jan O JORGENSEN in the Korea Open 2019 Men’s single match, that lasted within 37 minutes on Friday.
In set-1 both the players played well and get each point one every time and levels the points. Totally 4 game points happened on the set-1. At 20-19 Kashyap got an opportunity but Jan O JORGENSEN breaks that and Jan O JORGENSEN got two game point opportunities at 21-20 and 22-21 but Kashyap didn’t gave any chance to Denmark player he breaked those two. After that Kashyap got game point opportunity at 23-22 and he converted that into game. Kashyap won the set by 24-22 the set-1 take 22 minutes.
In set-2 PARUPALLI Kashyap played aggressively from the starting of the set and increased their lead every time when he got opportunities and doesn’t gave any chance to Jan O JORGENSEN. He won the set-2 easily by 21-8 and entered into the semi-finals of Korea Open 2019.
On Saturday he will faces number one seeded Japan player Kento MOMOTA in semi-finals.
illumuniateSeptember 27, 2019
0 1 minute read
Facebook Twitter Pinterest WhatsApp
Facebook Twitter Pinterest Share via Email Print