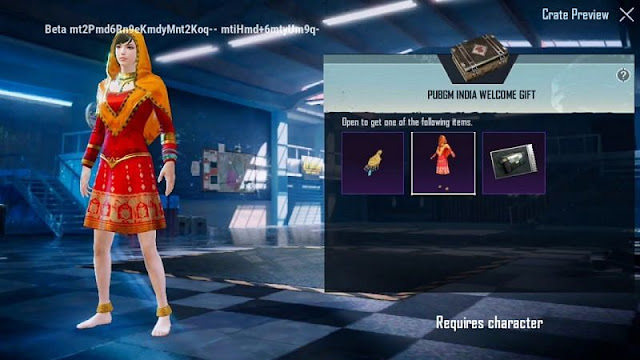 On 12th November the PUBG Corporation announced PUBG Mobile India version will be released soon. But there is no official confirmation on release date yet. The players in the country eagerly waiting for the game release.

The outfit is available for permanent, may be the welcome gift outfit is a default character clothing in Indian version. These leaks are from the beta version of the PUBG Mobile version.

According to the Gem Esports Instagram post these rewards have appeared in the PUBG Mobile beta version, and these outfits could be just for the testing purpose and might change with the actual release.

The PUBG Players in Indian gone for very upset when the Ministry of Electronics and Information Technology added PUBG Mobile and PUBG Lite in their second wave apps ban list along other 116 apps.

However, with the announcement of their comeback the players get excited and eagerly waiting for the PUBG Mobile Indian version release.