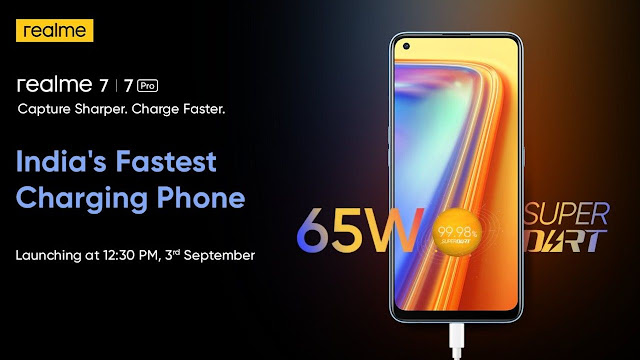 Your vote, your choice! I am experiencing the speed you’ve been expecting. We are ready to bring it to you.
RT if you want me to kick-start the Faster 7. It’s all about 7 now! #BuildingTheFaster7 pic.twitter.com/LDv1ttMeeM
— Madhav Faster7 (@MadhavSheth1) August 26, 2020

The company will host a digital launch event on its social media channels to announce the launch of the new model. In addition to the invitation sent to the media, the Realme Twitter account has posted an image showing 65W Superdart on Realme 7 and Realme 7 Pro Fast charging shows the presence of technology. The phone features a punch-hole display design.
The Realme 7 series is set to debut as the successors of the Realme 6 series, including Realme 6 and Realme 6 Pro which were both launched in India in March, and now the 7 Series series will be launched in September. For now, stay tuned for updates and updates.
illumuniateAugust 27, 2020
0 1 minute read
Facebook Twitter Pinterest WhatsApp
Facebook Twitter Pinterest Share via Email Print