If a Player wins Olympics along with Grand Slam in the same year is called “Golden Grand Slam”.

Who Win Most Grand Slam Men’s Single Titles till now? 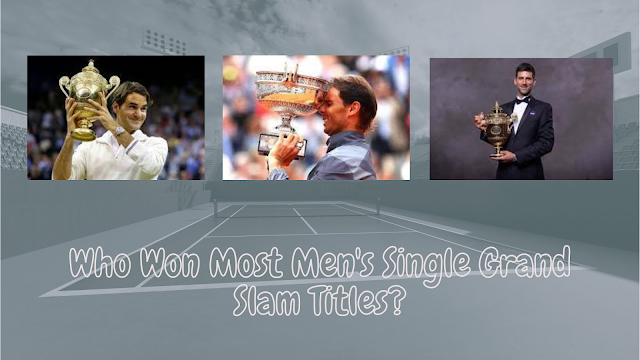 Roger Federer is in top with record winning of 20 Grand Slam Single titles, who is also topped the Forbes released Highest Paid Athletes 2020 with $106.3 Million , whereas Rafael Nadal (19 Titles) is in second position with difference of only 1 title.

Roger Federer is the Most Grand Slam Titles winner in the Male single Tennis with a record winning of 20 tournament titles. In that record winning of 8 Wimbledon titles, 6 Australian Opens, 5 US open and 1 French Open. By winning that French Open in 2009 he achieved “Career Grand Slam”. He is a Swiss Professional Tennis Player, currently he is at 4th rank in Men’s Single by the ATP. Federer held the Number 1 rank in Men’s Single for a record total of 310 weeks. Roger Federer also listed Top Place on Highest Paid Athletes in the World 2020 released by the Forbes.

Rafael Nadal is in second position after Roger Federer in most men’s single tennis grand slam tournment titles winners. Nadal has won 19 Gran Slam Titles in that record winning of 12 French Opens, 4 US Opens, 2 Wimbledon and 1 Australian Open. Nadal was created a record by won a grand slam title on every year consecutively a period of 10 years. In 2010 by wining US Open Nadal achieved the “Career Golden Grand Slam” and also “Career Grand Slam”. He is a Spanish Professional tennis player, currently he is at 2nd rank in Men’s Single by the ATP.

Novak Djokovic is an Serbian Professional Tennis Player who is the third Most Grand Slam single titles winner with 17 Grand Slam Titles. Djokovic has won a record of 8 Australian Open titles, 5 Wimbledon Titles, 3 US open titles and 1 french open title. Currently Djokovic is in the world No 1 Men’s single tennis player by the ATP. By winning French Open (2016) he achieved “Career Grand Slam”.

Pete Sampras is the forth Most Grand Slam single Titles winner. He is an former American professional tennis player who won 14 Grand Slam Titles during his career. Pete Sampras announced his retirement after 2002 US Open, in that he won in the final against Andre Agassi.

2020 Top 10 Highest Paid Soccer Players in the World by Forbes.