DC vs RR match Highlights: IPL 2020 23rd match between DC vs RR held in Sharjah, DC won by 46 runs against RR with their all round performance and with this win they entered into first position on IPL 2020 points table. 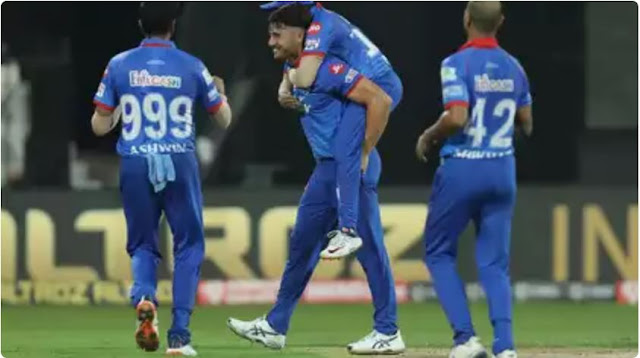 RR won the toss and choose to field first and made two changes in this game. Andrew Tye and Varun Aaron came in place of Ankit Rajpoot and Tom Curran where as DC played with their winning comb.

Prithvi Shaw and Dhawan opens the DC innings but they don’t get good start Jofra Archer gave a big blow by dismissing both the openers in his two consecutive overs. After that the DC captain Shreyas Iyer and Pant was felt their wickets as run outs.

The DC top order failed but in middle order the all-rounder Stoinis and Hetmyer creates a good partnership and steady the DC innings. After lost Stoinis wicket Hetmyer played a good innings with tail enders and put a good total on the board. DC scored 184 for 4 wickets in 20 overs. Hetmyer is the top scorer with 45 runs in 24 balls. Jofra Archer picked 3 wickets for 24 runs in his 4 overs.

RR starts their 185 Run chase but from starting of the innings they lost wickets. Ashwin starts with Buttler in his first over. After that captain Smith looked to built a partnership with the another opener but Smith was dismissed by an excellent catch taken by the Hetmyer.

From that RR lost his wickets continuously they didn’t go in the way to reach the target. RR scored 138 runs for 10 wickets in 19.4 overs. Rahul Tewatia is top scorer with 38 runs in 29 balls. Rabada picked 3 wickets Ashwin and Stoinis shared two wickets each.