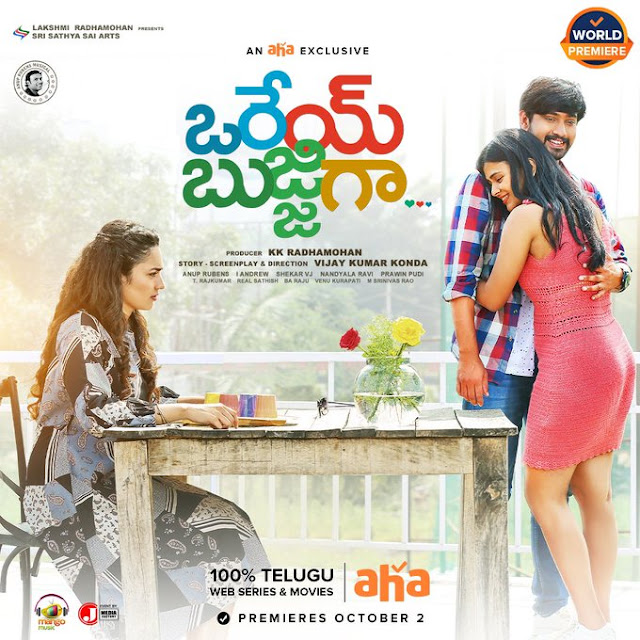 Another Telugu movie is ready to release through OTT platform. Recently Natural Star Nani’s V movie released through OTT platform it gives better results. Now its time to Raj Tarun’s OreyBujjiga, the team announced today, the movie OreyBijjiga will released through ahavideoIN OTT platform. It will Premieres on October 2.
Raj Tarun shared this thing through his twitter account who is acted as a hero. He said “the wait is almost over! We are all super excited to bring you 100% entertainment with #OreyBujjiga only on @ahavideoIN. Premieres October 2. Don’t miss the fun!

The wait is almost over!
We are all super excited to bring you 100% entertainment with #OreyBujjiga only on @ahavideoIN.

OreyBujjiga is a fun entertainer which was directed by director Vijay. The Sri Sathya Sai Art producing this movie and Malvika Nair and Hebah Patel are acting as heroines in OreyBujjiga.
The music director AnupRubens composed music for this movie.
Due to the corona virus the movie theaters are not opened since announced lock down. So, the film makers are not ready to wait for some more time. They are releasing one by one movie through OTT platforms. Natural Star Nani’s V is the first movie released through OTT after lock down.
illumuniateSeptember 11, 2020
0 1 minute read
Facebook Twitter Pinterest WhatsApp
Facebook Twitter Pinterest Share via Email Print