Dadagiri Season 8 Grand Finale winner is Monami Ghosh. Dadagiri is a reality show which was hosted by Sourav Ganguly. The final episode of the Dadagiri season 8 is filled with music,dance, humour and Dada’s googles. 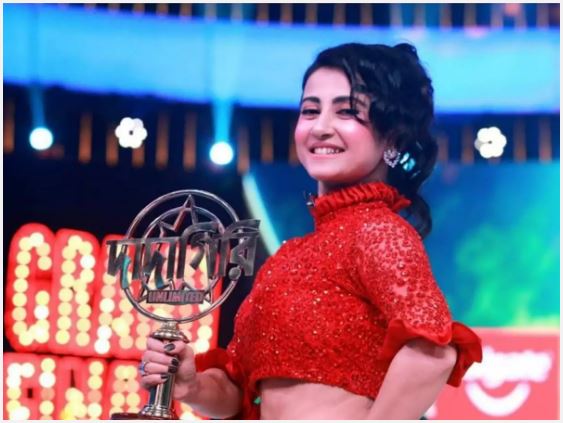 Monami Ghosh is the winner of Dadagiri grand finale, she was awarded with a trophy along with cash prize. This is not the first time for Monami to participate in the reality show but the win of the reality show made this year participation is special for her.

She said ” I have had the privilege of taking part twice before but this time was different. It was a grand-scale celebration of the show and i enjoyed every bit of the show. It was a mixed feeling for the crew members because it was a gala affair as well as the end of this season. The mood got rubbed off on me too.”

Sourav Ganguly asked her “how it was meeting dada on this show”. Monami Ghosh said that “I have met dada before on other occasions but meeting and interacting with him on a platform like this is always fun. He listens to everyone with attention and gets to know them better. It was a great experience.”

After winning the Dadagiri grand finale Monai is all praises for the team she got. She said “I went there with a competitive attitude but never thought of winning at the grand finale. Besides the fact that my team performed well, luck also had a hand in it. Green is supposed to be my luck color and all members were wearing something or the other in green. I was also representing Darjeeling, my favorite tourist destination. I love hills and have visited many places in India and abroad. But Darjeeling is dearer than Switzerland.”

The Actress Monami Ghosh also won accolades for her dance performance during the course of the show.