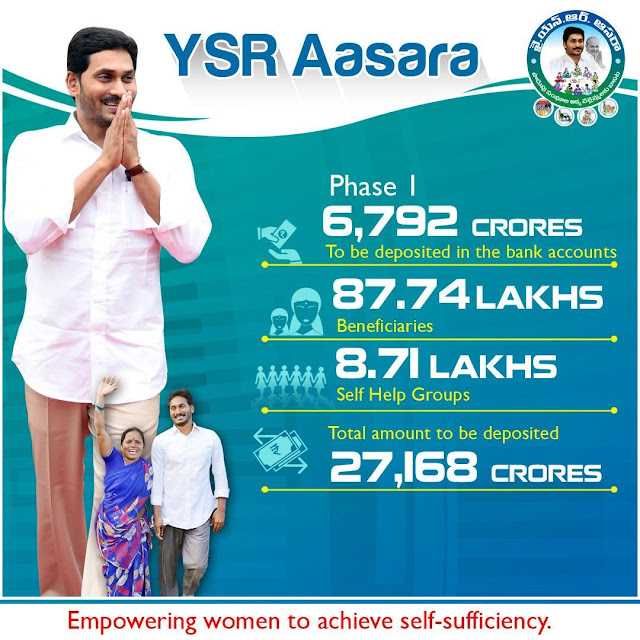 As promised in the election manifesto-Navrathnalu, the YSRCP Govt. has launched the YSRAasara Scheme today. Out of the total of Rs 27,168 crores dedicated to the scheme, the first installment of Rs. 6,792 crores has been credited into the accounts of DWCRA women.
Under YSRAasara scheme 90 Lakh women’s will benefit in next 4 years. The government of AndhraPradesh will spend 27,169 crore in next 4 years, including 6792.21 crores in 2020-21 year under YSRAasara scheme.
Hon’ble CM YS Jagan to launch ‘YSR Aasara’ which will benefit 8,70,000 SHGs. The flagship scheme would reimburse the outstanding loans of Self-Help Groups in the state.
YSRAasara cost the government Rs 27,168 crore. It is further said that the women who would become free from the debt trap under this scheme will not have to take loans again. They can use this money for any purpose in future if they had already repaid their loans in full.
YS Jagan Noticed in his padayatra that How lakhs of women hailing from poor families have been forced to take mammoth loans to cope with the costs towards education,health care, elderly care, daily needs, and other emergencies and fall in vicious cycle of debts.
With the aim to make every woman in Andhra Pradesh self-sufficient by freeing them from the debt-trap, Hon’ble CM YS Jagan  has launched YSRAasara. The loan amount would be given in four installments from this financial year under the YSRAasara Scheme. First of the 4 installments of Rs. 6792 Crore has been deposited in the bank accounts of SHGs, as promised in the manifesto.
The AndhraPradesh government gave its nod to YSRAasara scheme to empower women and improve their financial standing
YSRAasara is meant for providing financial assistance to Self- Help Groups (SHGs) which availed bank loans for meeting all types of financial needs, in the form of reimbursement of entire outstanding loans as on April 11, 2019.
illumuniateSeptember 11, 2020
0 1 minute read
Facebook Twitter Pinterest WhatsApp
Facebook Twitter Pinterest Share via Email Print