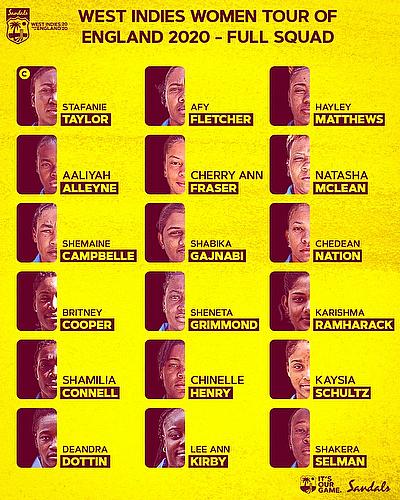 West Indies Cricket Board announced 18 members Women’s squad for upcoming England Tour. The main players missed on this squad due to pandemic corona virus. In this tour West Indies will be played a five match T20 series. The first T20 match will starts on 21st September 2020 and this series will ended with 5th T20 held on 30th September. Check the details for T20 series scheduled below.

Actually the England team was earlier to host a Tri-series with India and South Africa. However, the BCCI had withdrawn the name from this tour. At the same time, South Africa also refused to visit England due to corona virus.

The West Indies team announced without their main fast bowler Anissa Mohammed. Due to the corona virus Anissa withdrawn from the team. The CWI said in a statement, “All the players were given the option to decline the team selection due to concerns related to covid-19. Anisa Mohammed was the only possible selector who declined an invitation to tour England”.