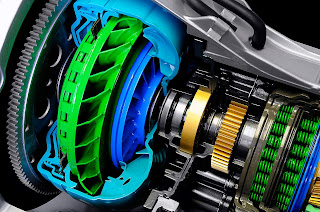 It’s a traditional automatic transmission the AT remains the most popular most common form of automatic transmission common form of automatic transmissions globally, torque converters have been around for a really long time now and as a result have become quite reliable the 80 makes use of torque converter by the generated by the engine to the gear box
Torque converters are made of three main components
1.Impeller
2.Turbine
3.Setter
This three components are lock and unlock with multiple clutches and maintain predetermined gear ratios however conventional ATS can sometimes take away a fair bit of power resulting in power loss in drive train and also provide poor fuel economy compared to regular manual transmission.
The Positives of conventional automatic transmission are smooth gear shift and reliability.
The Negatives fuel efficiency is lower compared to other types of gearbox.
2. AMT (Automated Manual Transmission)
It is the one of the simplest implementation of an automatic transmission and is also most cost effective. It was popular during the 1970s in countries abroad however with advancement in technology the AMT gear box has made a comeback in emerging markets like India. The AMT is actually regular manual gearbox but with addition of electro-hydraulic system which comprises of an electronic control unit and a hydraulic system. This system which is also known as transmission control unit of TCU monitors parameter like accelerator pedal position and vehicle speed among others and control a hydraulic operation which changes the gear automatically without the driver needing to use the clutch. Some AMT also offers manual shift mode where the drivers can change the gears by using the gear shifter without having to use clutch. Due to the cost effectiveness it is mostly found in budget cars like Hyundai Santro,  Maruti Wagnor, Renault Kwid and so on.
The positives is that AMT is most cost effective transmission compared to its counterparts, AMT is also known to deliver high fuel efficiency something at the level of manual transmission of manual transmissions
The Negative AMT is known to have slower gear shifts and they are also not smooth and produce a gear shift sound that often hear in manual transmissions.
3.CVT (Continuously Variable Transmission) 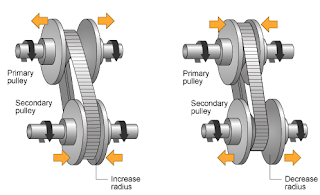 CVTs are one of the most defined automatic transmissions. The CVT is used steel pulleys and a belt that can generate indefinite Q ratios, means that there are really not gear changes are such leading to smooth seamless power delivery this type of transmission is very quiet and is widely used in gilda scooters in India however CVTs can feel bit elastic when you drive them especially when you notice what is called a rubber band effect premium cars like Hyundai i20, Maruti Baleno use this type of transmissions CVTs can also get peddle shifter to give them a sporty appeal. In India Honda cars like jazz, city and civic offer pedel shifters with a CVT.
The Positives about CVTs are, they are best fuel economy among all automatic transmissions they also have really smooth operation in stops at traffic situations.
The Negatives are we have to suffer from rubber band effect when revved really hard and CVTs are also known to have slow acceleration.
4.DCT (Duel Clutch Transmission) 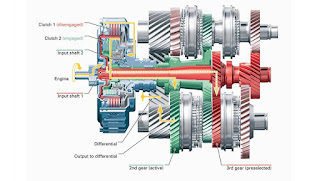 It uses two separate shafts with own clutches for gear shifts. One shafts for odd no and other for even no gear. This type of automatic transmission provides really quick shifts and also delivers good fuel efficiency however since technology involved in system is fairly complex and consists of a number of electronic components the cost associate with manufacturing a DCT is relatively higher which is also the main reason for its lower level adoption. Maintenance cost are the another area of concern for this cities. Cars like Volkswagen Polo, Fox Hagen Amiyo, Skoda Rapid and Octavia are all available with duel clutch transmissions. Volkswagen having their own DCT which it calls DSG (Direct shift gearbox).
The Positives are these Vehicles are known to have lighting quick up and down shifts they also have great performance and fuel efficiency.
The Negative are these Vehicles have higher manufacturing and maintenance cost and they are heavier than other transmissions
illumuniateJanuary 20, 2020
0 3 minutes read
Facebook Twitter Pinterest WhatsApp
Facebook Twitter Pinterest Share via Email Print

Why Tears comes while people cry? Types and Benefits of Tears – theilluminiate

Design and Analysis of Inboard (Integrated) Braking system for an ATV. New breaking System with less weight and and effective as compare to others