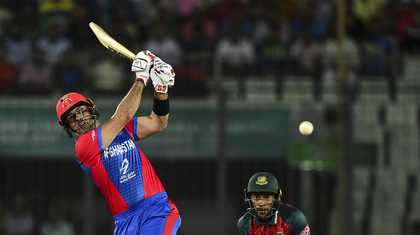 Afghanistan won the toss and choose to batting first. Rahmanullah Gurbaz and Hazratullah Zazai opens the Afghanistan innings but Saifuddin strikes on the first ball of the innings by removed Rahmanullah Gurbaz for Golden Duck and gives dream start to Bangladesh. The Bangladesh captain Shakib removes Hazratullah Zazai (1) in the second over of the match, both the openers are back to pavilion in the consecutive overs. Saifuddin removed Najeeb Tarakai (11) in their second over and captain Shakib removes Najibullah (5) in their second over both bowlers gives good start to Bangladesh team. Afghanistan lost their four wickets for only 40 runs, then the former captain Asghar Afghan and the all rounder Nabi leads the Afghanistan innings by creating 79 runs partnership for 5th wicket. After removal of Asghar Afghan wicket, the all rounder Nabi scored 21 runs in Soumya Sarkar over who bowled the 18th over of the innings. Nabi remains as not out with 84 runs and finishes the Afghanistan innings with good total of 164 runs for 6 wickets in 20 overs. In Bangladesh bowling Saifuddin took four wickets and creates their best figure  (4-0-33-4) in T20 International and Shakib took two wickets.
The Bangladesh starts the chase of 165 runs, but Bangladesh also lost their wickets as like Afghanistan at the starting. In the first over the spinner Mujeeb removes the opener Liton Das for duck in the second ball of the innings. Fareed Malik removes Rahim (5) in the second over of the Bangladesh innings. Mujeeb removes the set batsmen Shakib (15) and Soumya Sarkar for Golden Duck in two consecutive delivers and gives advantage to Afghanistan team. Then Mahmudullah and Sabbir Rahman defend Afghanistan bowlers, leads the Bangladesh innings towards their chase and creates a partnership of 58 runs for 5th wicket. Naib breaks this partnership by removed the dangerous batsmen and Bangladesh finisher Mahmudullah (44) by a slower delivery. In the next over the spinner Mujeeb removes the set batsmen Sabbir Rahman (24) in their last over and finishes their quota (4-0-15-4) with tremendous bowling performance. The Bangladesh team now in troubles. After that Bangladesh doesn’t give any fight to the Afghanistan. The Bangladesh innings end at 139 runs all out. Mujeeb took four wickets and Fareed Malik, Naib and Rashid Khan share two wickets each.
illumuniateSeptember 15, 2019
0 2 minutes read
Facebook Twitter Pinterest WhatsApp
Facebook Twitter Pinterest Share via Email Print